Shipping to all European countries

What is an Instant Pot?

What is an Instant Pot? 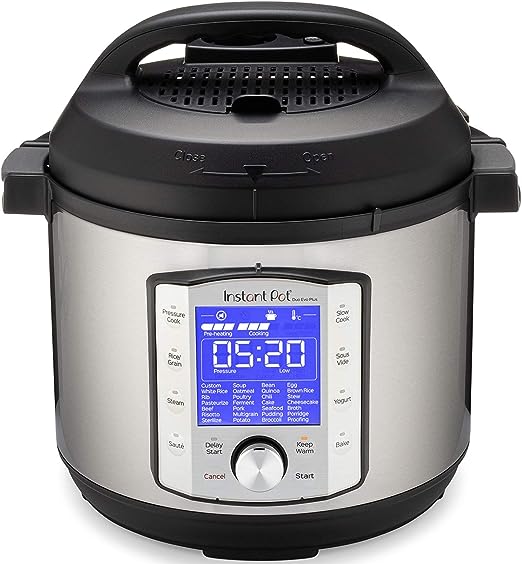 The Instant Pot is not the pressure cooker your grandmother used to cook in the eighties and are many times more advanced and therefore safer than traditional pressure cookers (they do not explode, and are completely safe if you use them according to the manual and properly maintain the parts).

Instant Pot pressure cookers will not explode, melt or overheat. In addition, the Instant Pot has several safety features specially designed to ensure that nothing but your taste buds explodes when using the device.

These multicookers have integrated software that allows you to perform various cooking functions at the touch of a button for a simplified cooking experience. The main functions of these cookers are slow cooking, baking and fast cooking. However, there are buttons that further break down functions to help cooks perform different types of cooking.

An Instant Pot is an electric pressure cooker, but it offers so much more. It is a multi-cooker which means it has many cooking functions. You can use your Instant Pot as a slow cooker, rice cooker, steamer, yogurt maker or frying pan, it's an all-in-one appliance, so you can brown a chicken, for example, and cook everything in the same pan. In most cases, Instant Pot meals are ready to serve in less than an hour.

The fast cooking times are thanks to the fast cook function, which traps steam created by liquid (even liquid released from meat and vegetables), builds up pressure and works steam back into the food. You will probably use the Pressure Cook and Sauté buttons the most.

But don't confuse it with a pressure cooker on a stovetop. Unlike our grandparents' pressure cooker, this Instant Pot eliminates safety concerns with a lid that locks and stays locked until pressure is released. Yes, you can cook a whole chicken in the Instant Pot. Families of six or less will likely be happy with the 6-quart multicooker.

All Instant Pots are made with at least 10 important safety features that are not always found on other types of cooking appliances. Several safety features are aimed at maintaining safe pressure levels when using the pressure cooker. These multicookers detect whether the lid is properly closed before pressure cooking begins. Leaks are also detected by the device in case the seal is not installed correctly. This is to prevent food from burning.

The Duo offers all standard Instant Pot functions with an additional setting for making homemade yogurt. It also lets you cook quickly on low (in addition to high), so you have more control over the cooking temperature of soups and lentils, which can ultimately prevent them from overcooking into mushy oblivion. It's only $ 20 more than the most basic Instant Pot model (the Lux) and often goes on sale, so we think it's the best bang for your buck.

While some people equate the high temperatures of pressure cooking with the loss of nutrients, this is the opposite of the truth. Speed cooking allows heat to be distributed evenly and quickly, so you don't have to submerge foods such as frozen vegetables in water. You only need just enough water to generate enough steam, and most recipes use about a cup of liquid.